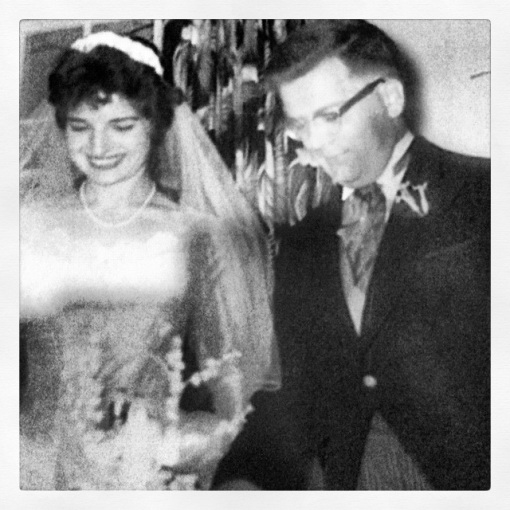 I remember the first time I used it. It was our first wedding anniversary and I made my husband a “Chinese” dinner using some sort of pre-bottled sauce that I poured over a few pieces of chicken and some frozen vegetable mixture. Then, as the gummy concoction sat and simmered on the stove, I proudly set our tiny, second-hand kitchen table.  I took out two settings of our wedding china, filled the sparkling glasses full of wine and carefully polished the silverware before neatly placing it by each plate; and then we celebrated.  We celebrated with cheap wine and gluey chicken over sticky Minute rice served on magnificent china plates, in a four room, drafty apartment we rented above a dance studio, across the street from a noisy twenty-four hour gas station, and it was grand.

We’ll do this every year I thought. But we didn’t, we forgot how nice it was and went out to eat on our other anniversaries because for some reason we thought we should, because somehow that seemed better, fancier, more grown up, and so the china stayed unused up on the shelf.

The second time I used my china was years later, when I hosted Thanksgiving in my now bigger, not so drafty home. I was nervous that day, nervous about the turkey being too dry, the stuffing being too bland and my china being chipped or broken.  When the kids reached out with their sticky fingers for the pretty china dishes, I smiled politely and quickly handed each one a paper plate, hoping to avoid dropped dishes and shattered glasses.  After dinner, when everyone had finally left and the kids were in bed, I washed, dried and carefully inspected each piece of china before breathing a sigh of relief and placing it all back up on the shelf; it had made it through unscathed.

Then, this past week my parents who have been married for fifty-four years finally decided it was time to move out of their home. The home they have lived in for forty-five years.  The home where they raised their children, and kept them warm and sent them off one by one to find their way into the world.  It is too big now for only two people, it needs a lot of work, upkeep…and it is just time. So, as we sat around the other day, drinking coffee and discussing the impending move, what they will take with them, and what they will have to leave behind, my mother mentioned her wedding china.

“I need to take my wedding china. You know, we never even used it.”

“Never?” I said in disbelief (as if using mine two times in twenty-three year was so much better than never.) “Why you should be eating off china every night! You earned it! Forget getting new plates, use your china!”

My brother chuckled. “I’ve never used mine either” he said, the pain of his still recent divorce barely hidden beneath his deep laugh.  We all paused and then giggled as we imagined the certain therapeutic release that would be felt if he were to eat off his wedding china and then promptly smash it all on the floor, before sweeping up all of the broken pieces and throwing them away.

So, that’s why I am using my wedding china tonight. Because it’s Monday.  And because we are having lasagna. And because the truth is, no one gets through this life unscathed.