Merry Christmas, or Happy Holidays, whatever suits you.  It has been a hard week for this country.  A week full of grief and sadness.  I have no new words to share, no pearls of wisdom about this great loss; I just thought I would publish this small story I wrote to help spread some cheer. A story about Santa.  A story to remind us all about childhood and the fun and the mischief we got into.  Have a great holiday and hold your kids close, but also hug those adults you love. They were once kids too.

When Santa Was Small

T’was the night before Christmas, the kids tucked in tight,

all drifting off to sleep on a cold winter’s night,

with dreams of Santa Claus dancing through their heads,

and the gifts they would find when they sprang from their beds;

new books, bouncy balls, and shiny skates for their feet!

All except George, who sat up straight in his bed,

while visions of black coal filled up his head.

His eyes were big and round, his lips all a quiver,

his legs starting to shake, his body to shiver.

Was it real what he heard? Was it all true?

Santa could see everything that you do?

or when he taped “You have cooties!” to the girls’ bathroom door…

What about last week when he threw a spitball during lunch,

then kept throwing more, until he had thrown a whole bunch!

George slid down under his covers and hid.

There would be no presents now! Santa saw what he did!

Then his mom walked in and switched on the light,

“What’s wrong George?” She asked. “Something not right?”

George pulled back the blankets, poked out his head,

cleared his throat, took a gulp and quietly said,

“Mom, do you think Santa was ever just a young boy, like me

a boy who worried he might not find a present under the tree?

Do you think Santa ever sat in school, trying so hard not to wiggle,

but then his mouth started to twitch, and his legs started to jiggle?

At lunch did he gobble up his Jell-O, but not his fish sticks or peas,

and did he have to be reminded to say thank you and please?

Do you think he ever passed gas or let out a HUGE burp?

Did he drink his milk fast, through a straw, with a slurp?

Did he leap off the bus with a rip and roar

run up the steps and throw open the door?

Did he holler and jump, sprint and dash all about

Do you think Santa went out to skate on the ice

spinning and showing off,  then falling down…twice?

Mom, do you think Santa tried to be good, but sometimes was bad…

acting up, yelling out, driving everyone mad!

George’s mom smiled, kissed the top of his head,

pulled up the covers, fluffed his pillow and said,

“You know what I think…I think Santa did,

all of those things because he was once a kid.

A kid filled with sillies, with love and with joy,

a kid who made mistakes, like any small boy.

I bet… after Santa fell, his sister helped him back up,

and gave him hot chocolate in his favorite cup.

to help him unwind and forget all his troubles.

I think Santa sat and soaked ‘til he was shiny and clean,

and then brushed his teeth ‘til they glistened and gleamed.

He went and found his favorite pajamas with feet

and slid into his bed under soft, cozy sheets.

I think Santa’s dad read him a book and gave him a kiss,

Then his mom shut the door, leaving on one hall light,

And as he laid in his bed, I think Santa looked to the sky,

and dreamed about flying in a sleigh way up high…

with eight magic reindeer and hundreds of presents with bows,

zooming and zipping through the white Christmas snow.

So yes, I think Santa was once a just a boy,

a boy full of mischief and sillies and joy.

And I think he remembers what its like to be young.

because Santa, like you, was once little and small,

and Santa knows being a kid, well, that’s the best gift of all.

Merry Christmas to all! December is both such a short and a long month isn’t it? Short for adults who feel the hurried pressure to send the cards, get the perfect gifts, decorate the house, make the cookies, all with a bright smile and a joyful nature (ARGH!) And it is L-O-N-G for kids, who have been patiently waiting and feeling the holiday anticipation building since Halloween, when the stores all began their advertising campaigns.

I am currently in waiting mode myself. I am patiently waiting for the end of the MeeGenuis contest, which is over in about one week so if you haven’t voted yet PLEASE do and you have already, thank you so much.  (Just so you know, I hate these contests too, where you have to beg for people to vote for you, but unfortunately it looks like it is a necessary evil of the trade.) I am also waiting for another story of mine to be printed in Adoption Today Magazine, which should be out shortly, so in the meantime, I thought I would go ahead and post my Christmas story for you to read while you are taking a break from all this craziness.

This story really began a few years back when I was telling (begging) my youngest son, Teddy, to brush his teeth before bed. He was whining and stalling and then said, “I bet Santa’s mom doesn’t tell him to brush his teeth!”  (Can you believe his dad is a dentist!)  I said, “Of course she does, and wash his hands and put down the toilet seat!”  Teddy laughed and then said, “Does Santa even have a mom?” I said, “He must!” And we started going back and forth with the things Santa’s mom might do or say, then we added Santa’s dad. Pretty soon, I thought…I should write this down. So I did. Tweaked it a bit and here it is. Hope you enjoy it.

When Santa was little he had a mom just like yours.

Made him a bowl of hot oatmeal on frosty mornings,

Sprinkled it all over with brown sugar,

And always remembered not to add any raisins.

“No more wrestling with the elves.”

And “Happy Holidays! Watch out for that Christmas tree!”

A mom that helped him to put on all his snow gear:

And one fuzzy hat.

Always making sure to sit right behind him and squeezing him really tightly so he wouldn’t tumble off,

Then laughing like crazy when they ended up rolling around together in the cold snow at the bottom.

A mom that helped him to take off his now:

One no longer matched glove,

And… “Nicholas Christopher Kringle-Claus, where is your hat?”

Start a crackling fire to warm him up,

Make two big mugs of hot chocolate with marshmallows bobbing on the top,

And put a big bowl of buttery popcorn on the table for them to share.

Help him to decorate the Christmas tree,

with the red and green balls placed all along the bottom,

And then lift him way up high so he could place the shining star up at the tippy, tippy top.

Help him find his favorite stuffed penguin, his cuddly polar bear and his worn out grey walrus,

And say, “Sweet Noel! Could you please, PLEASE brush your teeth!”

Even Santa had a mom that would:

Read him his favorite book,

Give him a soft kiss goodnight,

And whisper into his ear,

“May all your Christmas dreams come true.

When Santa was little he had a mom, just like yours.

When Santa was little he had a dad just like yours.

A dad that would:

Play holiday hide and seek with him all morning,

And even let him win (sometimes).

A dad that could:

Make the best gingerbread house in the whole North Pole with:

And one fat candy cane chimney on the top.

A dad that would say:

“Sweet Blitzen, could you please stop ringing those jingle bells in the house!”

“Go. Now. And sweep out those reindeer stalls.”

And “Nick-O-laus! Who ate all the candy that was on that gingerbread house?”

A dad that knew how to:

a look out tower,

and not just one, but two hidden hideout rooms.

A dad that would:

And always picked him up and dusted him off when he fell down on the ice,

And always picked him up and dusted him off when he fell down on the ice,

And always picked him up and dusted him off when he fell down on the ice.

A dad that showed him how to:

Rock out to Christmas carols on the electric guitar,

And drink a cup of eggnog in just one gulp… with a loud burp at the end!

(But only when Mrs. Claus wasn’t around.)

Even Santa had a dad that would:

Make sure to leave on the hall light,

And whisper into his ear,

When Santa was little he had a dad just like yours. 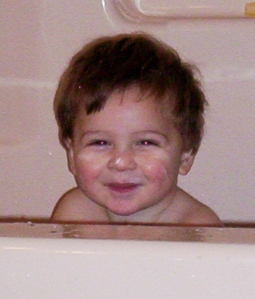