So we are all into March madness over here, both the basketball kind and the kind brought on by prolonged winter cabin fever.  Lucky for me, Susanna Leonard Hill is sponsoring a March Madness writing contest to help alleviate some of the boredom and restlessness that has settled into my brain. This one requires a 400 word max fractured Fairy Tale.

It’s all just for fun (and a few great prizes) so give it a try, you just might get hooked!

Once upon a time there were three little pigs.

Three little, lazy pigs that just sat around all day and did nothing but play video games.

Until, one sunny day when Mama Pig decided she couldn’t take it anymore.

“What?” said the First Pig.

“You want us to go out… there?” said the Second Pig.

“But, there’s never anything to do outside.” complained the Third Pig.

“Have an adventure! Use your imagination! Just go outside, NOW!”

So the three miserable, lazy pigs went outside.

“I miss my video games,” cried the Third.

A dark shadow crept slowly along the fence.

“The wolf! Mom! Mom!” The three pigs banged on the door.

“Go away,” said Mama Pig from inside the house.

The three pigs stared at one another.

“Quick!” said Pig Number One. “To the straw pile!”

The three pigs ran across the lawn and burrowed their way into the middle of the straw.

“Ha!” laughed the Wolf. “Do you really think that measly house made of hay is going to keep me away? I am going to huff and puff…”

The three pigs dug as fast as they could through the back of the straw pile.

“To the tree house!” yelled the Second Pig.

The three pigs clambered up the ladder to the tree house and slammed the door shut.

A branch snapped, and then another, and another.

Suddenly through the wall came the wolf’s furry head, his red, beady eyes and his pointed teeth.

“Really, a house made of sticks?” He snarled.

The three pigs quickly threw themselves out of the treehouse, landing one by one with a thud on the dirt below.

“Over there! Behind that brick wall!” yelled Pig Number Three.

The three pigs scampered behind the wall but they knew it was no use;

“Sure was.” Said Pig Number Three. “See you tomorrow Wolf? 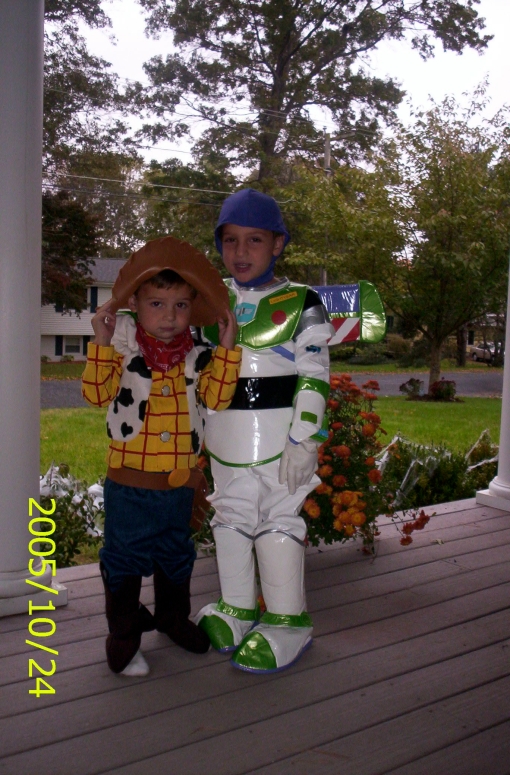 Halloween may have ended last night for some of you, but not for everyone. Halloween has been postponed in our town due to Mother Nature’s Nor’easter surprise, so we will go trick or treating on Friday instead. Now believe me when I first heard that the town police were officially halting Halloween I acted just like my four-year old, stamping my feet and crying. Then I moved on to the eight and ten-year old behavior yelling, “WHAT!! That’s not fair!” Next, I made my way to adolescence, shrugged my shoulders, and mumbled, “Jerks”, under my breath. Finally I emerged as an adult and reasoned, “It’s not anyone’s fault. Some parts of town still aren’t safe and there are downed wires in places.” Which is really the truth, and I wouldn’t want to have the police chief’s job of having to cancel the best day of the year for kids. To make things even worse (or better if you are a writer and think this would make a great book) the police chief in my town has the last name of Meany! Is that great! Chief Meany cancels Halloween. There is definitely a story in there just waiting to be written!
Anyway, all is now fine here in Whoville. We have recovered and are looking forward to a Friday haunting…the big problem for me at this point is trying to keep my kids from changing their minds again about what they want to be for trick or treating! The progression for Eliza has gone like this: super hero, fire fighter, pirate, tooth fairy, princess, a tooth fairy princess, a firefighter-toothfairy-princess… I don’t think I can make it through many more of these costume changes! Here is a  poem I wrote based on this decision process…

Only a few nights to go until Halloween.
Oh, what should I be a frog or a queen?
I lined up my costumes from perfect to pink
And laid there, just thinking, not sleeping a wink…
I tossed and turned in my sweet little bed,
while pumpkins and bats swirled through my head.
Until…gasp…there was just one more night until Halloween!
Should I be something funny, or scary, or mean?
A ballerina, a witch, a bright yellow bee?
I can’t decide! I don’t know! I need help!
Can’t you see!
So we drove to the store, and looked all around.
I saw goblins and mummies and one creepy clown.
And then I decided! I knew what to do!
Why pick just one? Why not pick two!
Or more, even more! Be all that you want!
Put them together into one smorgasbord haunt!
My mom always says, “Be all you can be.”
So that’s what I was, a perfect picture of me.
A little bit silly, a little bit fun.
Throw in some crazy and then you are done.
A dancer, a jester, a silly old ghost.
I won the prize, for wearing the most!

Hey ! I am a guest blogger on adoption.com this week!  You can find my article there at

This is the piece I wrote…

It was a beautiful day yesterday. A treasure to enjoy before the cold weather sets in.  Early fall, the sun was shining, the leaves just starting to turn orange, red and yellow.  We ran around as a family; cleaning the garage, cheering at soccer games, friends stopped by, the boys looked for frogs and played wiffle ball in the backyard. In the afternoon, my husband piled as many boys as he could fit in his car and took them out to lunch. I took Eliza, my four year old in my car. She wanted McDonalds (sorry health nuts), or Old McDonalds, as she calls it, so we went to get her Happy Meal, and I got the requisite boring mom salad.  We whipped through the drive thru and brought our lunch home to enjoy outside on the porch.

The house was momentarily still, as the boys were away and it was just my daughter and I enjoying our picnic.  We sat outside munching away, the leaves falling around us, and high above a plane flew quietly overhead.

Planes play a significant, symbolic role in our little lives. At bedtime, I often tell Eliza a short story of her adoption. She will whisper to me, “Tell me the baby Eliza story.” And I will whisper back in the dark about the baby that needed a family, and the family that needed a baby. About how her dad and I got on a plane that flew high across the ocean to get her. We wrapped her in a soft, pink blanket and took turns holding her the whole way back on the plane.  When we got home, there was a big party for everyone to meet her, and her brothers and sister had made a beautiful Welcome Home sign that spread across the whole front porch.

It’s a soothing ritual and a way for her to always know a piece of her story. Just a piece.  I have never ventured far outside of the story. I have never explained what “adoption” means. It is just a word she knows.  It has been enough, for now.

But as we sat out there on the porch, looking at the blue sky and the plane sailing smoothly across, I thought, I should start telling her now.  So she will always know.  Not just that adoption means love forever, but the nitty-gritty physical part of the adoption; that another woman gave birth to her, that she was not created in my body, as her siblings were, but that another mom and dad created her…that whole piece I have left out.  I felt like I should introduce the concept soon, she is almost school age, she sees other women who are pregnant and is starting to ask, ”Why is her tummy so big?” Soon she will say, “I was in your tummy too once, right?” With my biological kids it was easy, “Yes you were! I remember you kicking me!” But now….what do I say?

It’s easy to tell her a bedtime story about a plane and wrapping her in a blanket of love…it’s not so easy to look beyond that. So, I thought I will tell her gently, slowly and we can talk about it in pieces, as kids thankfully do. I want her to always know so it is never a surprise, just a natural part of who she is…but I guess I also want her to know to make it easier for me.  So she doesn’t turn to me in public and say, “ I was in your tummy too, right?” So we can have our own discussions, on our own terms and then she can say just as proudly as any child, “I was born in someone else’s tummy and in my mom’s heart! ”

So on a splendid fall day, in a moment of quiet and sharing, I thought, “Here I go.”

“You know what?” I said, cheerfully.

She turned and looked at me. A chicken nugget in one hand. Her eyes big and brown, her long hair tousled, her sparkly shoes always on the wrong feet, glimmering in the sun.

And in a sudden unexpected rush, I felt my throat close. Tears appeared out of nowhere. I couldn’t say it. I choked.  Because the truth is, I want her to be from my tummy. I want to be the one that felt her kick. That pushed her out into her dad’s waiting arms. I want to avoid the questions that will surely come, the possible pain she may have. I don’t ever want her to ever feel “less than” or unwanted. She is so not that.

“That plane sure is beautiful,” I said. 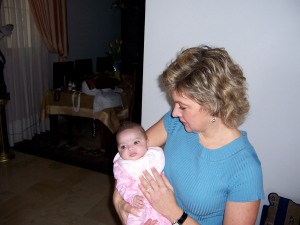 You don’t choose your family. They are God’s gift to you, as you are to them. ~Desmond Tutu